The pill press machine in today’s world has become a very important piece of machinery as most of the drugs consumed these days are in the form of pills or tablet. Be it in the pharmaceutical industry or in the cosmetic industry, the pills are considered quite convenient for individuals to consume and hence are the most preferred ways undertaken by the industries to sell their products. Pill Press Machine is a mechanical device which compresses the powder and converts it into tablets with precise size, shape, and weight.

There has been continuous development in the pill press machine. Earlier, the machine used to be a hand-driven one as compared to now where it is powered by an electric drive. The need for development in the pill press machine was felt due to increased demand for pills as there was a huge increase in diseased patients. Higher demand required more production which needed a tweak in the technology. Hence, there was a development of several new technologies in tablet production such as- Electric drive, Development of direct compression technology, etc.

Summary: Pill Press machine compresses the powder to convert it into pills or tablets of precise size, shape, and weight. The machine has undergone many design changes from being hand-driven to an electric drive. The demand for the machine has seen a huge jump due to an increase in the number of patients suffering from diseases, requiring medicines in the form of a pill or a tablet. 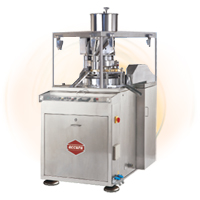 Currently, Pill Press Machine can be divided into 2 types: 1.) Single Punch/Single Station/Eccentric Presses 2.) Multi-Station/Rotary presses
In rotary presses, the compressive force on the fill material is applied by both the upper & lower punches, leaving the granules to get compressed in middle.


Summary: The Single Punch Pill Press machine uses only a single set of tooling. The lower punch remains static whereas upper punch applies the compaction force. The Rotary Presses have multiple tooling station and hence are also known as Multi-Station Pill Press machine. With both upper and lower punches applying the compressive force, these machines ensure an increased output.

Operation of Pill Press Machine
The operation of a single press machine is simplest of all machines and is generally preferred for low production applications. It uses a single stage of tooling to process the powder in order to achieve desired compaction and size of tablets. Single stage tablet press machine is quite easy to control and performs the desired operation at a very low decibel level. The tooling system of the pill press consists of a pair of upper & lower punch system and a die that ensures of high utilization ratio.

Multi-station rotary press is also known as a rotary press as both the lower and upper punches are in continuous rotary motion. This tableting machine has a complex design and hence is preferred for intricate operations resulting in considerably higher production rate. The machine head rotates with the punches moving up and down. It has a fixed cam that controls the compression process of the pill press machine. Rotary tablet press machines are mostly employed for large scale production requirements. They prove to be highly cost effective in applications that require high production rates. These tablet machines provide a flexibility of controlling the hardness as well as weight, independently.

The Pill Press machine plays a crucial role currently as a wide variety of drugs and medications are usually preferred to consume in tablet form. High production and efficiency for tablet manufacturing can never be attained without the appropriate technology. Various reports suggest that the demand for tablet processing and packaging equipment will increase with every coming year. This demands a tweak in the current technology to ensure higher production rates which meet these increasing demands. Various machines such as Double Rotary Press Machine, R&D Tablet Press, Bolus Tablet press observe a rise in their demand and is predicted to be one of the most sought after machines in the future.

The Double Rotary Press machine finds extensive demand where there is no need to produce round, double side engraved tablets. The R&D Tablet Press machines are mostly preferred in research laboratories having lesser output rate. The Bolus tablet Press is required where there is a requirement of simple and precise tablets from powder.

The Pill press machine has undergone several design changes in order to come toe to toe with the current requirement. We, at Fluidpack, ensure that our machines are of the latest technology and standards capable of high production rates in order to cater to our client’s need. We offer a variety of pill press machines to choose from, such as- High-Speed Single sided/Double Rotary Tablet Press Machine, High Speed Pill Press II & IV, B4-Double Sided/D4-Single Sided Rotary Tablet Press, Single-sided Tablet Slugging (Bolus) Machine, Single & Double Layer Mini Tablet Press & many more, to make sure that we attend to numerous requirements.