It is important to understand the tablet making process to understand why tablet press machine is so useful. It starts with the formulation of the powder which is a mixture of several products. This is usually a mixture of the pharmaceutical ingredients along with several other components like diluent, lubricants, binders, etc.

This powder is fed to the tablet-press machine prior to which it may undergo a granulation process to ensure required particle size. This machine consists of a cavity that is formed with the help of a die and the upper and lower punch. This defines the shape and size of the tablet. The way it works is the solid tablet is formed once force is applied to the punches that press the powder to fuse it together.

What is a Tablet Press Machine?

With the technological evolution over years, tablet press manufacturers have been highly successful in developing high-end models of rotary tablet press machines to meet high production requirements. This mechanical device was developed with single or several tooling stations to compress granules or powder into tablets of uniform style. The advantage of the tablet machine is that high output can be achieved with minimal labour. The rotary tablet press also makes sure that it decreases the waste of valuable formulation in non-specific tablets. Since this advanced machine offers immense accuracy and consistency in the manufacturing process, they are used for research and development purposes too.

Types of Machines There are several types of tablet press machines as mentioned here: 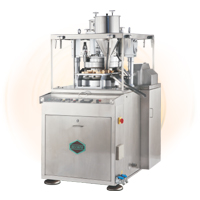 Applications of a Tablet Press Machine

The tablet machine has several applications and is very beneficial to several industries. For example, it is vital to the pharmaceutical industry to create a variety of drugs (round tablets).

The single station machine is useful for batch production or a laboratory production. One can manually operate it to ensure precise settings of the fill and tablet size as well as the compression force. Alternatively, it can also be automated.

It is used for the purpose of making chewable tablets. This type of tablets contains other substances as well like mannitol, lubricants, binders and several other ingredients. It is also useful for the production of effervescent tablets that contain substances like tartaric acid, citric acid as well as sodium bicarbonate. This machine is useful for several other compressed tablets which may contain a wide range of ingredients like disintegrants, active drugs, lubricants and diluents.

The multiple station tablet press machine also has several applications in the industrial, medical, pharmaceutical sector and is more effective than the single station tablet press machine. The advantage of this machine being that it does not require a lot of maintenance, can handle a high volume, is efficient and highly accurate. It is useful in several industries since it can handle a wide range of ingredients.

These machines aid in the process of wet powder granulation and formulation of tablets. They are efficient for the formulation of tablets with dry powder compaction granulation. The other applications include single process granulating, pallets & granules coating, tablet compression, tablet coating – film & sugar. It also has several applications in biotechnology, medical food (nutraceutical) and cosmetic industry.